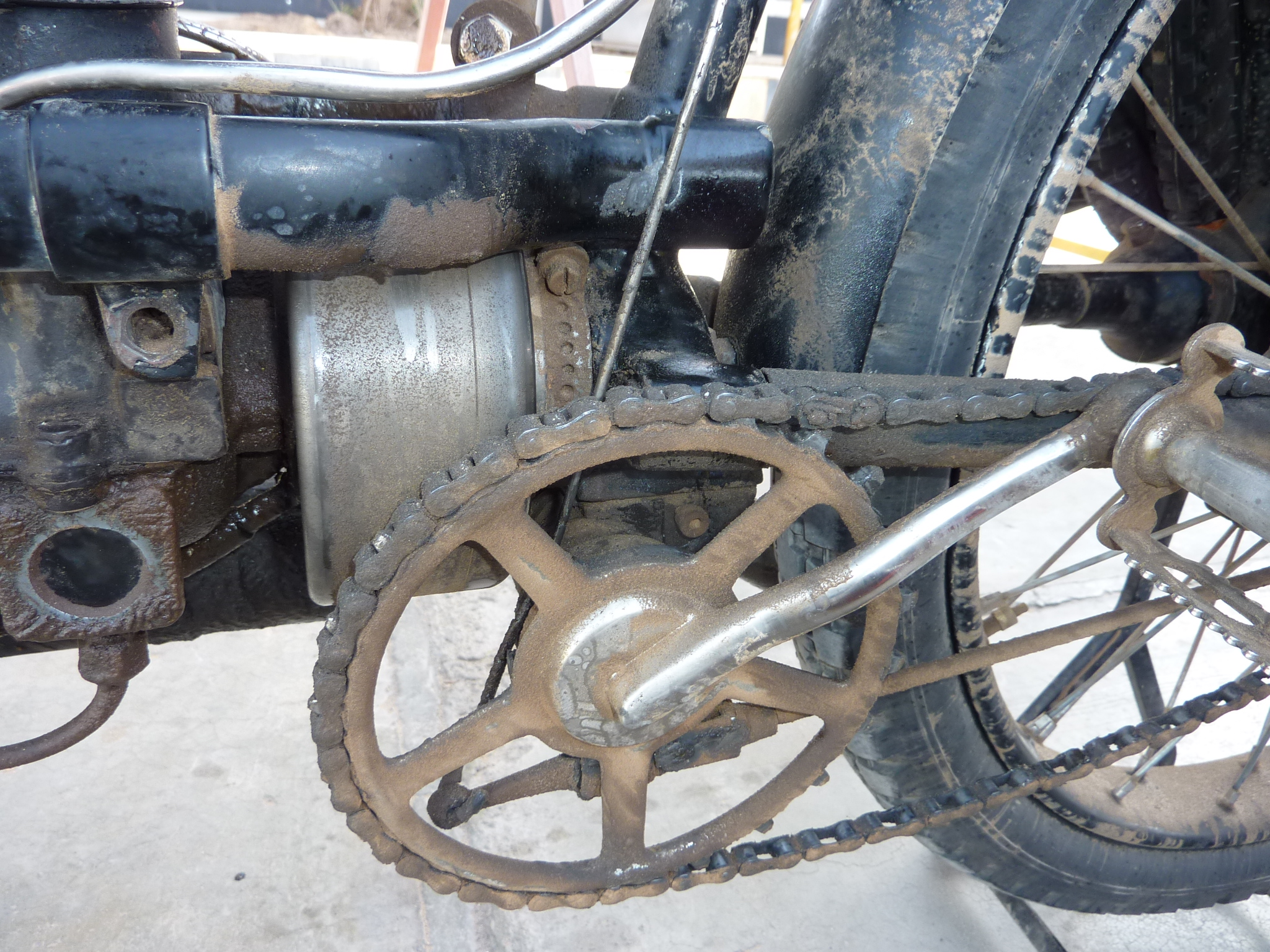 What a difference it makes to be back in control again. After saying goodbye to Yashi and having no police escorts I’m relishing taking things a bit easier. While we had the police with us I wasn’t able to stop as often when I wanted to monitor the oil usage and instead had to just keep topping it up to ensure the engine didn’t suffer. It’s hard on a bike this old, but I’ve been amazed at just how she continues to tick over when she’s not under pressure. I’d been using 1 litre of oil every 200 kms when I had an escort but have been able to reduce that to 1 litre to 300 kms and may even achieve better than that in the coming weeks. But oil and sand don’t mix and the image shows just what Effie had to deal with.

I spent a few days in the ancient city of Bam where more than twenty-six thousand people were killed and additional thirty thousand were injured in the devastating earthquake in 2003. How does a population recover from a tragedy this monumental? I wandered around the old city but only got to see about 1/20th of it due to so much being unstable. There’s a great deal of scaffolding everywhere and it is expected to take until 2012 before the restoration is complete. The beautiful mudbrick walls of the castle look like something out of the Arabian Nights and I can only imagine how wonderful it used to be and hopefully will be again.

At Akbar’s Guesthouse, Mohammed, Akbar’s son kindly arranged to have my panniers repaired as the stitching was coming apart and despite being ill Mohammed was a generous host. I’m carrying a gift of delicious yellow dates that have been my first real treat in weeks. I’m savouring every one but hopefully there’ll be a few left to share with Lynne when she arrives. Before I set off from Bam, heading towards Kerman, I packed a few bread rolls and half a dozen boiled eggs to see me through the day, a very wise move as it turned out.

The only problems I’ve experienced on the road in recent days has been with crazy motorcyclists who dart in front of Effie without indicating. Shades of Bali & India. Other road users are courteous and people I meet off road are extremely kind and generous. An example was when I pulled into one gas station. A customer paid for my fuel and the petrol station owner took me inside and made me a cup of tea. He then handed me two watermelons. I understand that it may be considered impolite to refuse a gift in some cultures, but where the heck was I going to put two watermelons? It took a good deal of gesturing to explain to my host that I was already overloaded and that on this occasion I had to refuse his kind offer.

I’ve found having a note written in Farsi helps with explaining the basic things a little. On one side it tells all about the bike & where I’m from, then on the other side the note asks where I can fill up my bike with petrol. Perhaps it should also say, “Sorry, I’ve no room left for watermelons.”

After having a tyre blow out in India, I’ve been worried the replacement tyre wouldn’t last, but it’s already done well in excess of 3000kms and still has a 1/3 of the rubber left on it. If all goes well I’ll get at least to Tehran before I need to change to a new one. Knowing there are spares waiting to be delivered when I give Thomas in Germany the nod is definitely a weight off my mind. The only spokes that have broken in recent weeks have been the original ones that were on the bike when I left Australia. The spokes I had made up in Pakistan are proving much stronger, so any that break are gradually being replaced – one less thing to worry about, again thanks to the support of friends.

I should have altered the jet in the carburettor before leaving Bam as the desert road climbed steadily and mountains were covered in snow, making it increasingly cold. So cold I had to stop and don thermal underwear when the layers of clothing I had on weren’t doing the job. Twenty kilometers from Kerman I camped in an abandoned building Yashi had told me about. It made for an interesting night under the stars & I was thankful for a snug sleeping bag.

In Kerman, I met up with Ali. He and his friends were fantastic tour guides. We drove out into the desert for a picnic. Despite the freezing winds we huddled together under blankets to enjoy our meal. The fact that these lovely young people would brave the weather for this old bloke was very moving.

I was taken to visit the beautiful and renowned Shazdeh gardens. The tradition and style of Persian gardens have had an enormous influence throughout the world, the most well-known being the Taj Mahal. With pavilions, waterways, fountains, ponds, courtyards and placement of trees, it really is, as the common Iranian name for enclosed space suggests, – ‘pari-daiza’     (a paradise).  I took the opportunity to try the peach flavoured hookah, so popular amongst Iranians, and while the experience of being seated in private ‘smoking rooms’ with friends was really enjoyable, the hookah itself wasn’t quite my cup of tea.

I also got to see a fascinating adobe ice-house which by being filled with ice and snow fetched on horse carts from the mountains, was previously used to preserve food. The wonderful old bazaar in Kerman was a maze of passages beneath intricately domed ceilings.  Although it now features modern goods like watches and sunglasses, there are still some interesting items used by locals such as huge copper pots.

Between Kerman and Yazd the brown desert landscape was much the same as I’d experienced all the way. One night was spent in what I thought was a truck stop. When the owner closed up for the night he gave me the key and said to give it to whoever was first in, in the morning. How’s that for hospitality? But I didn’t know whether to laugh or run for my life when another man, who spoke some English asked me to his house. He explained that his mother had no husband and would like some pleasure. Suffice to say there was a good deal of laughter from the gathered crowd. What was I missing out on? I’d been presented with some interesting gifts in recent days, and again it might have been impolite, but this was one offer even I had to refuse!