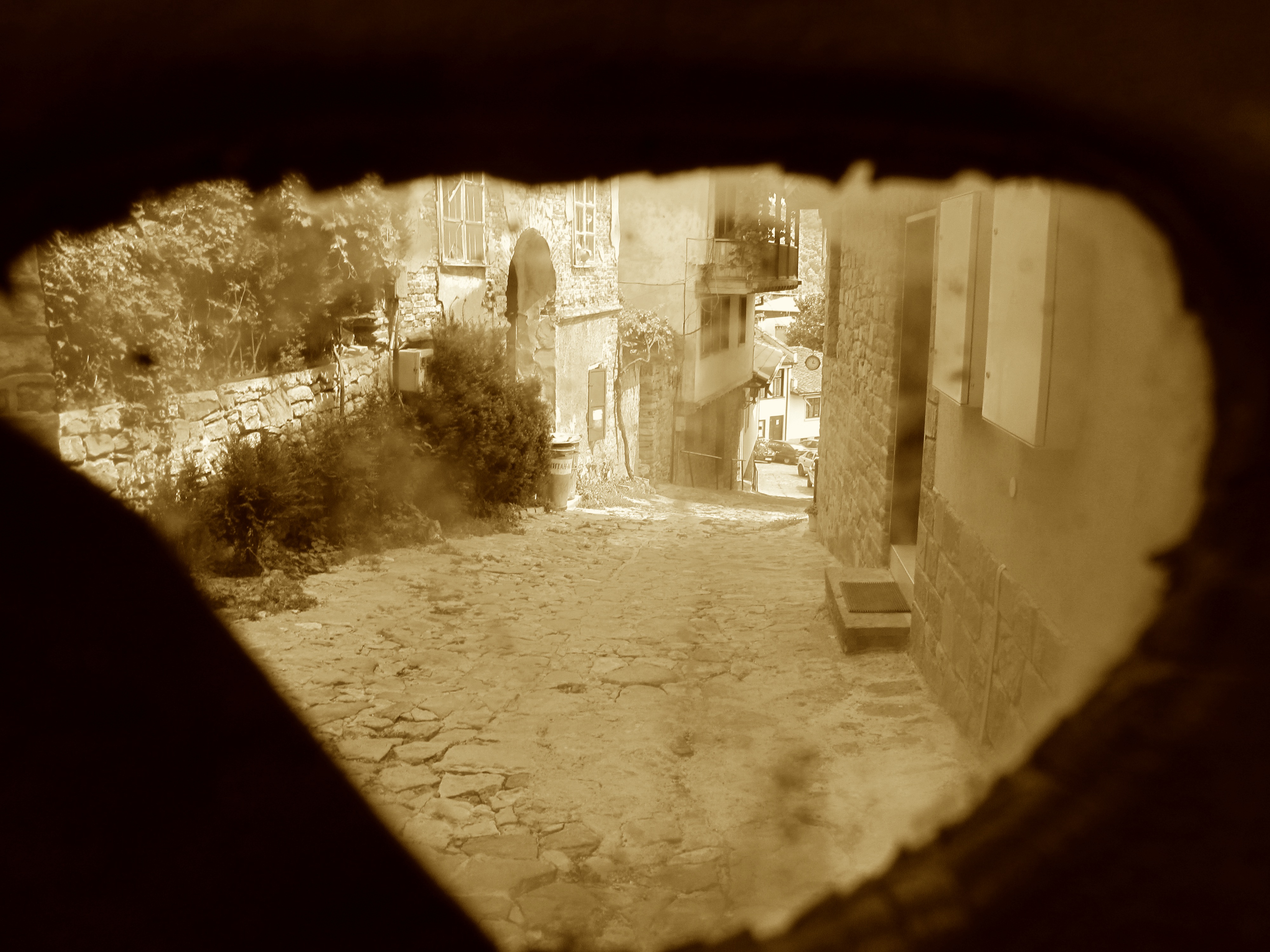 With no speedometer, I’d originally taken a rough guess at what distance I thought the total journey would ultimately be. Well, it seems I really underestimated this and daughter Nikki has been hard at work calculating distances far more accurately than I ever did. Apparently  I’ve already covered 13,926 kms – which is bloody amazing! I had been concerned Effie might only last a total of 12,000kms but she’s proved a gutsier little engine than first thought. So I take my hat off to her and the engineers from way back in 1910 that did such a great job creating this robust machine.

Today I’m setting off on the road again, heading towards Romania. I’ve been reading up on this next stage and it sounds like there are some pretty amazing roads & scenery ahead. I’ve been looking forward to the Dracula rally since I first heard about it a couple of years back and being with fellow riders for a whole weekend promises to be fun.

The weather in Bulgaria has been much hotter than I imagined it might be. I’m not sure if things will cool down at all in the next few countries, and it’s possible there could even be thunderstorms given the present heat wave we’re experiencing. Apparently when it rains here it ‘s a torrent, so I’ll be heading indoors if at all possible should that happen as I don’t imagine Effie is much good at swimming! Veliko Tarnovo has been an easy town to find my way around, not too many people or cars, and an interesting mix of traditional houses in the old quarter and apartment blocks in the new town. Waking to the sound of the chiming clock in the square and a spectacular view of the town and surrounding hills is pretty special.

Adrian, a keen motorcycling Brit with a couple of nice bikes in his stable, including a Galera, kindly invited Lynne & I to stay at his restored 200 year old home overlooking the old town. He and his lovely wife Sue have been fantastic hosts and we can’t thank them enough for their warm hospitality and friendship.

There’s a strong expat presence in Bulgaria and we’ve enjoyed getting together with people who’ve chosen to spend the summers here. Only the really hardy (or the insane), stay on for the harsh winters. Locals too have been welcoming, including Valeri & his family who treated us to a relaxed evening meal in the garden of his home on the outskirts of town. Surrounded by vegetable garden plots tended by his family & neighbours, it reminded me of when I lived in Sydney, where migrants from all over Europe, Asia and the Middle East had huge vegetable gardens which provided food for all manner of traditional dishes they brought with them.

I’ve recently stripped down the barrels and checked the pistons. All was well so I removed any carbon buildup, gave the exhaust valves a quick lap in even though they didn’t need it. I tried to buy a Bosch spark plug in Veliko Tarnovo for the one the porcelain had become loose in, but there were none available, (not even in another brand), that would meet the necessary heat range.

It made sense to remove the sponge and vinyl from the seat that I’d had put on in India as it was now too compressed and not adding any comfort whatsoever. Adrian kindly gave me a gel seat cover from a bicycle and I managed to fit it under the leather. It feels more flexible and we’ll know in the next few days just how well it works.

The pedaling chain had stretched to where it was necessary to remove one link to make it tight again. And to make the dovetail tighter on the adjuster for the pedaling chain, I’ve inserted a sliver of aluminum from a coke can and that’s been working real well.

Rear spokes are still a problem and I seem to need to replace one or two every few days. My feeling is the flange on the hub that the spokes go through is too thin which results in the heads being cut off the spokes.

Dave, a nice guy in VT, acted as a local guide in his old London cab, and very kindly made me a stick-on transfer for the bike tank, listing all the countries on my journey. It’s pretty exciting to realize that I’ve already visited most of them.

Adrian and I have pored over maps, checking out all the possible routes between here and Germany and I’ve been guided as to the places not to be missed. I usually don’t have the luxury of maps given they’re just another thing to carry, but we’ll be doing some of the riding in Romania together so sitting down with a fellow enthusiast and sharing that sort of camaraderie is always rewarding.

Until Lynne meets up with me again in Turda for the rally she’s travelling by buses and trains through the rest of Bulgaria and Romania. When she entered from Turkey, there was a 3 hour delay while customs officials went through everyone’s baggage, uncovering perfume and cigarettes the hapless travellers were hoping to slip through unnoticed. I, on the other hand, had been waved through with no inspection of my gear. Life can definitely be easier in some respects when you only have yourself and your machine to worry about.

Before I can set off this morning I need to push the bike down the cobbled street to the main road. There’s no way I can manage riding an FN with no suspension downhill (or up) on the cobbled village streets. Outside of the USA, I’m not sure if there’s any other yellow brick roads but Sofia, Bulgaria definitely has one. Whether or not I’m heading to the Emerald City (Wizard of Oz) is anyone’s guess!

ADDENDUM: Mileage to date (differences between Effie’s efforts and Ron’s due to Ron and Lynne taking side trips to Karakoram Highway, Shiraz and Caspian Sea when Effie stayed behind to rest!) 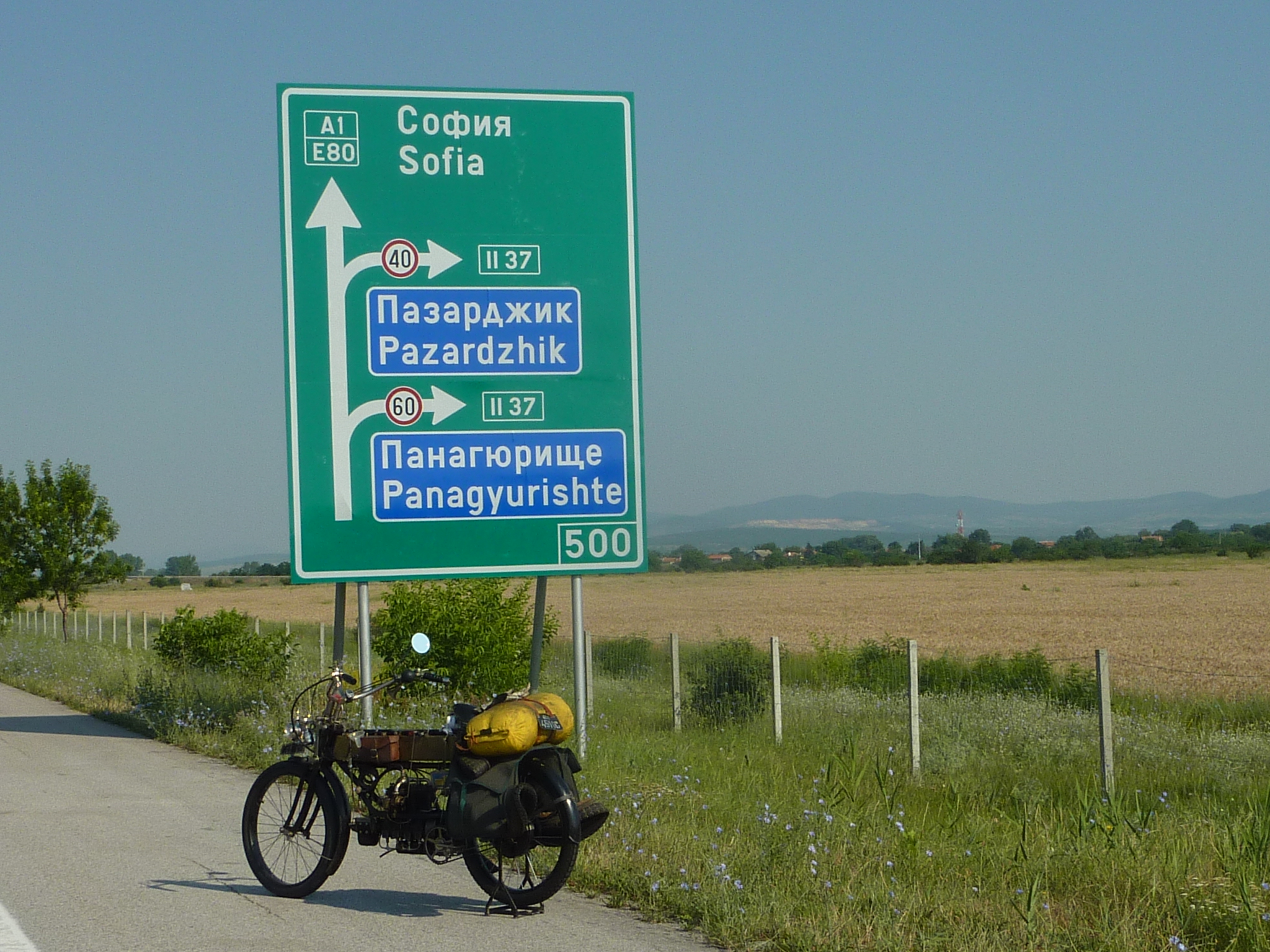