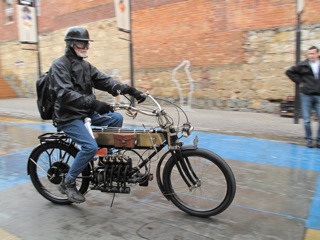 It’s taken me forty years to get my FN on the road. Not because I’m a slow old geezer who doesn’t know his crown wheel from his pedal crank, but because I’ve had other projects on the go and I’ve done my fair sharing of travelling in between. When I was given the engine cradle and an engine in NZ back in the late 60s I was already restoring a 1924 AJS and this was followed by a 1922 AJS with sidecar which took a number of years to fully restore. In the back of my mind had always been the idea to ride the FN back to Belgium where it originated, especially as the factory had been kind enough to send me an owners manual plus two photographs – a left & a righthand view of the 1910 model.

At vintage rallies & amongst other enthusiasts I never came across anything that dated back to 1910 and I had very little information to go on in terms of locating parts. This meant scaling each part from the photographs and making them myself on an old Colchester lathe. Years later when I moved with my family to Australia I continued with the restoration and had more success once the internet became available and I made contact with other FN owners. The dream to ride to Belgium became a distinct possibility once the motorcycle began to take shape -a rectangular brass tank and assortment of fittings & levers adding to its unique style. Networking put me in touch with FN owners in Belgium and I learned there was an annual Fabrique Nationale rally held every year in Germany and my plan was to make it there for 2010 to celebrate the bikes 100 year anniversary. Unfortunately circumstances prevented this from happening but the news that the 10th anniversary of the rally itself would be held in 2012 spurred me on to get the restoration finished and the bike tested.

Two thousand kilometres have now been clocked up and the machine has been fine tuned, if such a thing is possible. The dream that began all those years ago is about to come to fruition in about twelve weeks time when I fly to Nepal to begin the 12,000km journey. And so my mantra will be….

“Don’t tell me the sky’s the limit when there are footprints on the moon.”
? Paul Brandt