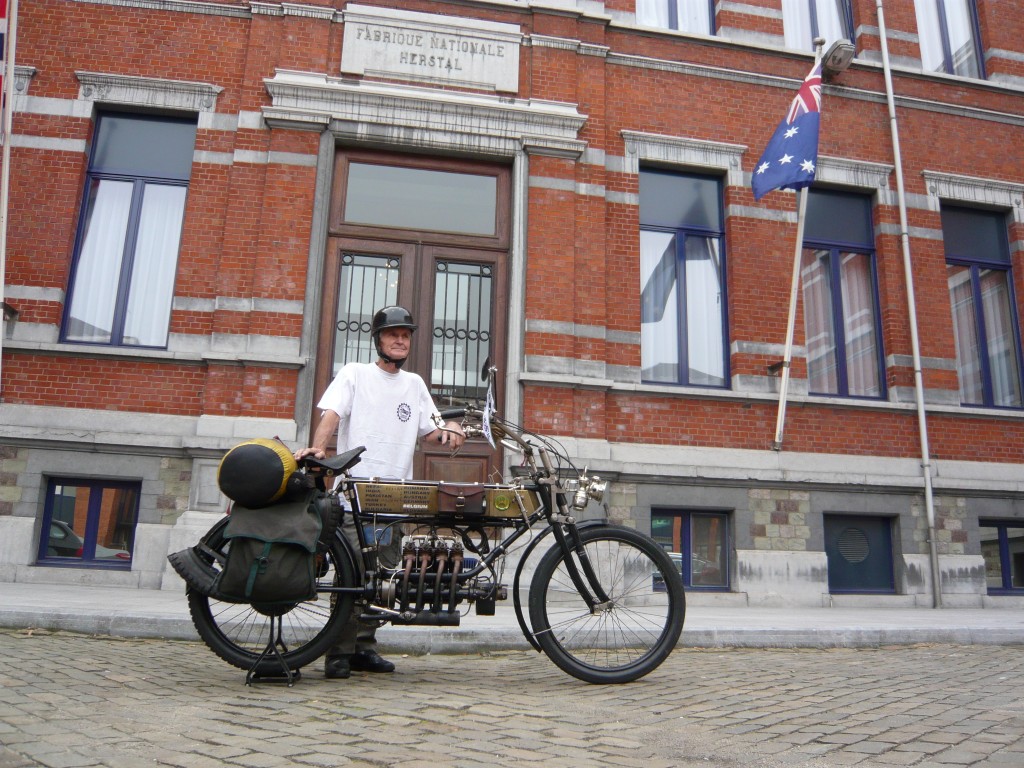 WE MADE IT… what more can I say. The feeling of riding through Herstal towards the FN factory was unbelievable. The years spent restoring Effie and those of dreaming about this becoming a reality, and now for it to be happening was almost more than I could believe. Accompanied by a large group of fellow enthusiasts and under sunny skies we chugged down the narrow street to the gates of the FN factory to where a welcoming committee was waiting to greet us.

14,606 kms – Nepal to Belgium and Effie did it admirably. No accidents, (apart from a slight brush with a rickshaw), no major mechanical failures on the road (just a few misdiagnosed problems), many broken spokes but no punctures and only two blowouts! What more could I ask for from such a wonderful old machine?

Just a week ago I was leaving Bernkastel-kues and had planned to take it easy for the next day or two heading to Liege, hoping to savour the last stage of the ride through the quiet countryside. As it turned out I made better distance than I thought I would and late in the day realized that if I quickened the pace I’d reach Gouvy by nightfall. Isabelle & Bruno were surprised to see me on their doorstep a day early, but made me especially welcome. Our common interest in old motorcycles made up for any language difficulties and then there was always the internet translator to help when we got stuck.

Once the fog lifted next morning Bruno and I set off for the Bastogne Monument, stopping off at his Dad’s workshop on the way. The star-shaped memorial at Bastogne is located close to the Luxembourg border and commemorates the 76,890 American soldiers killed, wounded or missing in the battle of the Bulge. And that doesn’t take into account all the other nations involved. It’s a somber reminder of the tragedy of war.

Here Pascal joined us on his motorcycle so we three posed on the different Belgium motorcycle marques – a Gillet, a Sarolea and an FN. We rode to Marche en Famenne together, meeting Claude, another Moto Retro club member along the way. With heavy, skies threatening, Bruno headed back home, unfortunately missing the sumptuous Belgian meal prepared by Pierrette and Claude.

I was presented with a couple of superb gifts created by club members Pascal Piron & Claude Van Denberghe. One was a wonderful replica FN agency sign, the other a beautiful model FN & rider with the inscription “Thank you for making us dream”. It seemed fitting to share a saying by Oliver Wendell Holmes…”Men do not stop playing because they grow old, they grow old because they stop playing.” The media were there for a couple of interviews and Lynne surprised everyone with a typical Aussie pavlova for dessert. A great evening was had by all with much laughter and the sampling of Orval beer.

Next day I rode to Herstal accompanied by Claude, Michel & Pierre to pose for a few pictures outside the factory, only to be joined by the CEO of Ars Mechanica Foundation, Robert Sauvage, who invited us to the formal reception planned in a few days time. Despite the drizzling rain there was a sense of euphoria to completing the journey and that night Lynne and I were guests once again of the Belgium motorcyclists who showed us wonderful hospitality over more beers, famous Belgium frittes and local dishes. Thank you everyone!

Then again on Friday 21st September 2012 it was with mixed emotions that I entered the grounds of the FN Herstal factory for the first time, where Effie began her life in 1910. The excitement that the dream had become a reality, a touch of relief it was all over, combined with a sense of enormous pride for what Effie and I had accomplished together in the name of FN. I was overwhelmed by the sincere enthusiasm & genuine support from everyone present, including members of Veteran Moto Club Belge along with the FN management & workers. My only regret was that Lynne was unable to be there to join in the celebrations due to severe pain in her knees, but she was with us in spirit.

And what a celebration it was, with hundreds of photos taken before and after a splendid lunch amongst newfound friends & companions. Many toasts made and I was showered with presents for both Lynne & I, trophies and other wonderful memorabilia. I remarked that I’d arrived to settle a warranty issue and Robert laughingly responded that unfortunately the warranty period only applied for 100 years, not 102!

This was a perfect time to remember all those I had met along the way, absent friends and family who’d helped make the journey possible and how much of a thrill it had been sharing something I loved with hundreds of people around the world. After our meal I enjoyed a guided tour of the showroom and the opportunity to see the direction the company had taken after production of motorcycles and cars ceased. A round of goodbyes and handshakes finished off what was a truly marvelous occasion. A special thanks to Michel Bovy & Robert Sauvage for making this all possible.

Pierre & Martine were our gracious hosts for a few days, showing us a little more of the city of Liege and surrounding countryside. At the VMCB club meeting I shared a few pictures from my travels, only to be presented with more lovely gifts and was particularly touched when members played the Australian National Anthem during the evening.

Now the time has come for Effie and I to stop and unwind, though it does seem strange and a little disconcerting not to be spinning her back wheel and jumping onboard for our daily ride. We’ll head home in a few weeks. Our house in Bali is sold and there’s much to do in finding a new home where I can set up my workshop and begin getting Effie back to her glorious self.

Thanks to you all for following the Old Bloke’s blog. Creating the stories has been a joint effort relaying diary entries to Lynne each night, her passing on messages to respond to, and the both of us trying to make it all legible for our followers. Our daughter Nikki has done an admirable job of initiating and managing the website. There’s statistics and information still to co-ordinate and much more of the story to tell. We have already begun work on writing a book and we’ve a couple of new projects in mind for 2013/14. I invite you to revisit from time to time to see how it is all panning out. If it has inspired just one person to pursue their dream then it has been doubly worth it. The only thing to be afraid of is not doing something….everything else is possible. 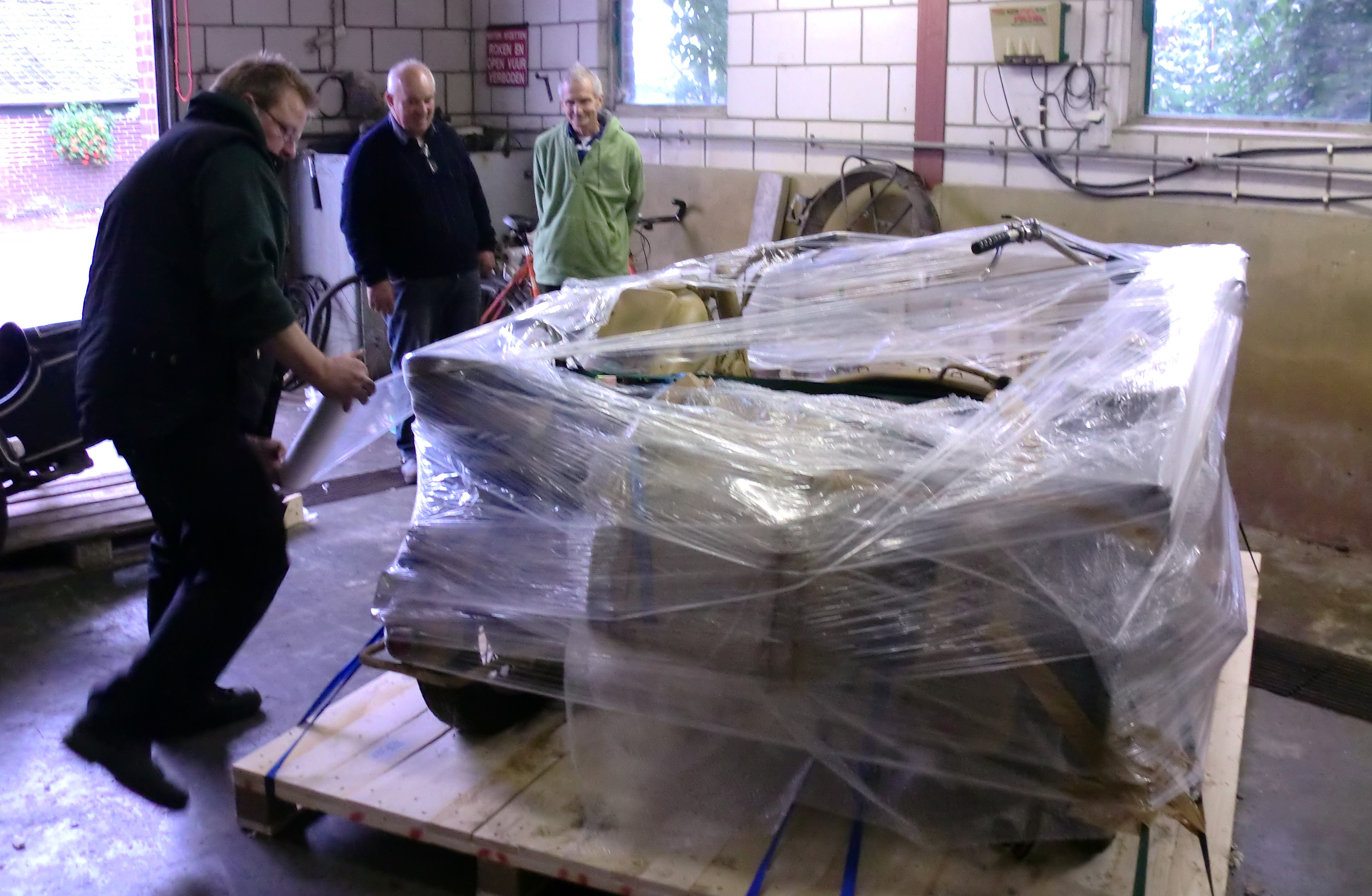 Effie’s trip all wrapped up…